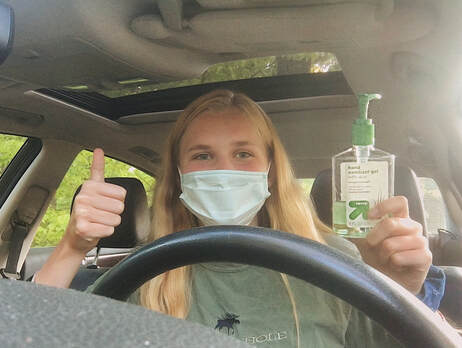 On March 12, 2020, Wayland High School was released for a two-week break due to a new virus present in Massachusetts. Little did we know that three months later, our country would be in complete, indefinite lock-down, continually fighting a global pandemic that has now taken more American lives than the Korean and Vietnam Wars combined.
I think almost all Wayland High School students would agree that three months ago felt like an entirely different era.  I had never imagined how much I would take for granted my time at school, playing sports, or hanging out with friends. These activities, while seemingly ordinary and unexciting, provided me with routines, pastimes, and things to look forward to, all elements that are necessary to normal life. When all of these things were simultaneously taken away, I felt somewhat lost. Suddenly, I could no longer see any of my friends, and my typical social school day was consolidated into a few short online meetings and endless Google Classroom assignments. I stopped leaving my house frequently, and during the rare occurrences when I did, I had to wear a mask at all times. These past few months have forced me to be much more self-sufficient and self-motivational. Without a school day where bells dictate where I go and what I do, I now have to set a schedule to hold myself accountable for completing schoolwork, household responsibilities, and maintaining a healthy lifestyle. This quarantine has also made me pay attention to the news a lot more, both because I have more free time and because I feel like the news affects me directly.
While adjusting to this strange new lifestyle has been difficult, I cannot ignore the fact that my struggles because of COVID-19 are relatively insignificant compared to what some others are going through. I recognize that I am extremely privileged to have parents who still have jobs, a home, health insurance, and the ability to socially distance to keep myself safe. I cannot imagine what struggles people who are homeless and jobless at this time are experiencing. Furthermore, no one I know closely has been killed or even infected by coronavirus. I imagine that losing a loved one to the virus must be the worst punishment of all.
A final troubling aspect of this pandemic is the uncertainty of the future. Although new cases are slowly declining in Massachusetts, so little is known about the virus that nobody can definitively say when or if life will return to “normal”. I predict that it will take a long time for life to feel the way it used to, where people can attend large parties and concerts without the threat of infection. I have no doubt that the COVID-19 pandemic of 2020 will significantly alter our world and will go down in history as a key event in shaping the American future.

It is no question that in this day and age, America is enduring extraordinary, unprecedented times. In addition to a disastrous global pandemic that has shaken our country’s society and economy, an era of protesting for black lives and an end to racism has been sparked. Considering all of this turmoil, it is clear that much can be learned from events of our country’s past. As cliché as it is, I believe that the phrase “history repeats itself” is more fitting than ever in the crises we are experiencing right now.

Recently, the horrifying murder of George Floyd by white police officers has ignited a new movement rooted in the blatant inequality and oppression of black Americans. Floyd was just one of the countless black men, women, and children that have been victims of unwarranted police brutality in recent months and years. While observing the events of this new movement, I cannot help but see its similarity to events of the Civil War. As we have learned, the Civil War started as a dispute about territory, but quickly morphed into a moral controversy about whether slavery was a just practice or a violation of Constitutional rights. Similarly, even though this new movement started in response to recent police brutality against black people, it has already become a larger expression of the pent-up anger about persisting racism in America.

The events of the Civil War also can be used to show how much of an effect public pressure can have on a leader and their policies. During the Civil War, Lincoln first proposed the idea of colonization as a solution to the issue of slavery. However, this proposal was met with overwhelming backlash from abolitionists and Republicans. I believe it was this backlash that really pushed Lincoln to take a more extreme stance and issue the Emancipation Proclamation. Likewise, the new movement for black lives has already yielded some reforms. Just recently, cities have announced their intents to disband police forces and take down controversial monuments idolizing Confederate leaders. By continuing to draw parallels between the Civil War and the national unrest today, I predict that this movement will not be suppressed or appeased until extreme reforms take place in America. These reforms may include a transformation of the criminal justice system, the national defunding and demilitarization of police, and more representation of black people in politics and media, all of which I believe are necessary to rid the country of its internalized systemic racism.