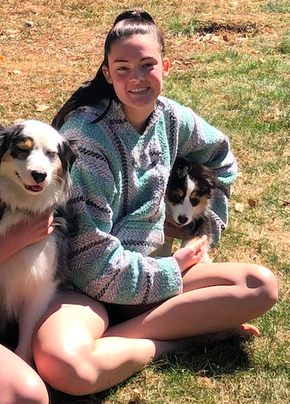 Waking up on Thursday, March 12, I never would have imagined that would be my last day of junior year. I walked into physics first block and heard my teacher say, “I’m surprised we’re even having school today,” in response to someone asking if school would be canceled in the future. I remember thinking, no, we’re definitely having school tomorrow. However, as the day went on things progressed very quickly. Rumors flew around about kids at the elementary schools being sick, and students received fake emails that school was closed. By the end of the day, we had been told to bring everything home with us in case school was canceled for a week or two. We all rushed out of our last block classes excited at the possibility of a break. I was supposed to have three tests the next day and I couldn't believe my luck that I might not have to take them. In all the confusion, excitement, and panic, I didn't even bother to say bye to any of my friends or teachers. We all assumed we would see each other in a week or two. The excitement wore off very quickly when we got home and learned that school would indeed be canceled for the next two weeks. All of a sudden, online school and sitting at home all day did not seem very appealing. Looking back now, a two-week break would have flown by, but those two weeks quickly turned into three weeks, which turned into almost two months, and then the rest of the school year. The time has been going by surprisingly fast in a blur of days that seem to be repeating themselves over and over. Everyone is worried about what's going to happen this summer, next school year, and even throughout the next few years. It seems like every time I open a social media app it’s all just arguments about when certain things will open and what is the best way to prevent getting the virus. The truth is that no one really knows what's going to happen. I am hopeful that places will start to open up this summer and everything will be somewhat normal by the time school starts again. However, there could easily by a second wave of the outbreak and I could experience my last year of school in Wayland through a computer screen. I never thought I would say I miss school, but this has taught me how lucky we are to have a school as great as Wayland. Aside from not getting to see my friends every day, I miss my teachers, the routine of my classes, and even just sitting in the commons for lunch. Most of us didn’t learn to appreciate the little things at school until it was too late, but you, as a Wayland High School student in 2070, have a chance to not make that mistake. Appreciate even your most annoying classmates and your most demanding teachers because one day, this will all be gone, and believe it or not you will miss it.

One good thing that has come out of quarantine is that people aren’t so wrapped up in the rush of our daily lives, and we are able to focus more on things that actually matter. Over the past few decades, there have been countless acts of police brutality and extreme racism, and no changes are really made. Yes, there have been smaller movements and peaceful protests started because of these acts, but nothing as drastic as what is happening today. For most of the country, life goes back to normal very quickly and we don’t really make an effort to do anything about these problems. This quarantine has forced people to realize what is wrong with our country and the fact that it is up to us to do something about it. Social media has become a big place to spread information about what you can do to help. It is filled with posts about petitions to sign, places to donate to, and books and movies to educate people about racism. While it is great that everyone is so involved with sharing about Black Lives Matter on Instagram, it sometimes feels like it is just a trend and people are only partaking in the posts because everyone else is. I’m worried that once our lives go back to normal people will stop caring and stop making an effort to fight for equality.

This year has honestly felt like one terrible thing after another. It should be bringing us together but it seems like it is tearing everyone apart. The Black Lives Matter movement is a movement for human rights, but people have turned it into a political argument. This creates a dangerous environment because people are forced to chose a side based on what others in their political party are doing. Some people are scared to speak out at all because they don’t want to “get too political,” when in reality this is deeper than politics, it is about people’s lives. Even though it feels like this is the end of the world, good things have been coming out of the protests. New laws are being passed, cases of police brutality are being re-opened, and law enforcement policies are changing. I think everyone is starting to have hope that even though this seems like the worst year ever, it is the wake-up call we all needed and something good can come out of it if we keep fighting for change.