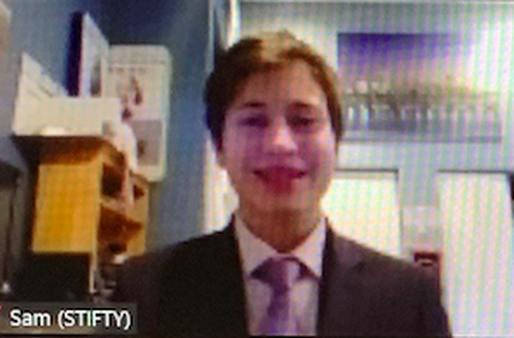 Over the past few months, I’ve gone from being a normal junior in high school to being forced to quarantine in my house for the foreseeable future. I no longer wake up at 7:20 in the morning, shove in some chocolate chip pancakes and then drive to school. I wake up around 10:30 and hop on a few group video calls using Zoom. I no longer can walk through the halls of Wayland High. Life is weird. Everything is unknown which makes it so much worse. This past Friday, my nanny, Mary Brayton, tested positive for Covid-19. She’s been at our house every weekday, even during the stay at home orders since she is practically family. She doesn’t really have many symptoms. Today, my mom (Nancy G), my sister (Rachel G.) and I took the Coronavirus test. It was really easy (they came out with this new antigen test that gives you results in 15 minutes!). We all are negative! Joy. I just hope school starts normally in the fall. It was my birthday last week and instead of having a party or hanging out with friends, which you can’t do because of the virus, I held a drive by, where a bunch of people drove by in their cars and waved and talked to me 6 feet apart with masks on. Everyone wears masks. It’s scary and sad. I know there are days where school stresses you out and you wish you could stay home, but TRUST ME, please be thankful for it. You never know what you love until you lose it. I’m really interested in what life is like at WHS now. I’ll be 67 in 2070, so hopefully I’ll still be around lol (laugh out loud). Please find me and tell me everything about your life! I’m genuinely interested. I’m gonna cut the crap and ask some real questions now. Can people teleport now? What about time travel? Are you even alive or did climate change kill everyone? I’m gonna go through some of the pictures attached now. For people’s birthdays, friends post on their Instagram stories photo compilations. What apps exist? Are yall like chipped or some futuristic shit? I hope not. Malls are closed so there are a few empty parking lot pics. School is closed hence the gate. People had lawn signs that said “We are all in this together”. Gas was cheap. Fields were closed. Trains weren’t running so the train station and parking lot was empty (this is in Natick where my dad lives, the West Natick station). My friend Amber and I bring each other cake and stay 6 ft apart. 2 Zoom calls with NFTY Northeast old and new regional board in 2020-21. A timely meme about medicare for all. My dream is to be White House Chief of Staff or Chief of Staff for a Senator, let me know if I achieve it. Finally, I’d love to include a very important youtube video (youtube is/was a video playing service) that can speak to the times we live in. https://www.youtube.com/watch?v=dQw4w9WgXcQ. It is customary now to sign emails off with “Stay safe”, so here goes:
Stay safe,
Sam

PS: Here is a short list of some of the stuff I did in High School. What are you up to?
2021 Class President
Debate Team Captain
5780/5781 NFTY Northeast Programming Vice President
Jewish Teen Initiative Peer Leadership Fellow
I encourage you to research me and all of the above stuff!! Okay peace out. Love you WHS!

That is the life of Black Americans. Is the Black Lives Matter movement a continuation of the civil rights movement? As of now, yes. It fights for the same cause and has the same purpose: to put an end to the institutionalized systemic racism in the United States. The main institution that still perpetuates racism is the police. Here is where I stand on all that’s going on right now.

ACAB: All Cops Are Bastards
The definition of bastardize in its verbal form is "to change (something) in such a way as to lower its quality or value" it is also used as a synonym of corrupt.

Here is a rundown of the police system:
First created before the Civil War, the police took the form of runaway slave catchers meant to ensure that the white men would have their property (you know, in the form of black human beings) returned to them in case they had left their oppressors. The idea that the police force is here to protect us is total bullshit. They were created to protect the property of the ruling class and continue to serve that very same purpose. Not only do they protect property and not people, but they also enforce laws regardless of how oppressive or racist by nature those laws are. Redlining (the practice of not allowing black people to get housing loans for specific neighborhoods) forced black families to raise their children in inner cities where policemen (many of whom came from outside the city) would patrol. This over-policing of inner cities has led to some ~interesting~ things. For starters,  white and black people smoke marijuana at the same rate, yet black people are 4x as likely to be arrested for it. Cops choose to be cops, knowing their jobs would require them to carry out unjust actions. Take for example just a few days ago, Trump wanted a photo op in front of the church that people were peacefully protesting in. Attorney General Barr had the police shoot rubber bullets (which are metal bullets with a rubber coating) and mace innocent protestors BEFORE THE FUCKING GOVERNMENT SET CURFEW. How could anybody be so blind to the blatant fascism of these police officers? They have arrested media crews trying to cover the protests. The protests are peaceful until the police come and use violence against innocent people. In Boston alone a few nights ago, police officers wrecked their own car (with sledgehammers while in uniform) as an excuse for them to tear gas and send smoke grenades into Boston Common.

Does this mean each individual cop is a bad person? No. Does this mean that all cops are bastards? Yes, because the system they choose to enforce every day is oppressive and systemically racist and fascist.

Okay, so now someone asks, "What do we do about it?" To be quite honest, I don't know. I don't have all the answers. We can start by better holding accountable police officers. The man who murdered George Floyd had 18 previous complaints against him, including twice where he shot a round into a group of civilians. There are plenty more like him out there. We need to mandate bias training in all departments all across the country. Police should be from the community that they are employed by (I'm hesitant to say serve because again they don't serve you, they protect the ruling class' property). I also think that not every police officer should carry a gun with ammunition. Tasers neutralize targets effectively without having such a high risk of murder. I also think defunding the police and demilitarizing them would be effective in reducing violence.