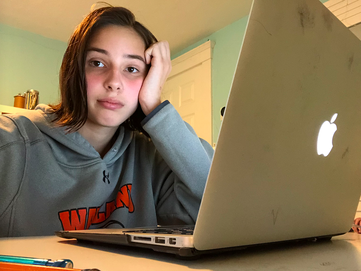 I've been having a lot of difficulty starting this letter. Every time I write the first sentence I delete it, and every time I think of an idea I change it. I don’t know how to truly depict the bizarreness of living through a worldwide pandemic. I don’t think anything will truly illustrate how unreal all of this feels. No matter how many documentaries you watch, pictures you view, or even stories you’ve heard, you will never understand our situation. I keep reminiscing to when life was normal a couple of months ago, and how we would all constantly make jokes about the Coronavirus. Now people don’t really want to talk about the virus because it's so depressing. I remember how in the beginning of January we heard about this new, contagious virus that ravaged Wuhan China. It was strange hearing about the news, it was like watching a movie. However, soon enough, Wuhan had appeared to become a shell of its former self, a ghost town. No one wandered the streets because everyone was scared of getting the virus. The full force of the Chinese government was doing everything in their power to slow the spread down. There were hospitals being built in mere days, strict regulations being implemented, and eventually the borders of Wuhan were closed. But by the rapid pace the virus was spreading, we were all scared that it was going to come to the United States. Soon enough, cases started popping up in Japan, South Korea, Vietnam and other nearby Asian countries. But despite the United State's efforts, or perhaps to put it more accurately the lack of the United State's efforts, the first case of COVID-19 had already traveled to Washington state.

The next day, the only thing people talked about was the Coronavirus case in the United States. On the way to school, in our classes, at our extracurriculars, and at home. Eventually, new cases started appearing in America. It became sort of like a game: which states had Coronavirus, and which states didn’t? We were all naive enough to believe that what happened to Wuhan and very recently in Italy, wouldn’t happen in America. But eventually, and inevitably, every state in the United States had the Coronavirus.

My family had a new rule: every time you entered the house, you had to wash your hands. School changed too, It became common for students and faculty to bring their own hand sanitizer. A couple days before quarantine I remember watching students wiping their own seats and desks before sitting down. Soon enough all the toilet paper and hand sanitizer went out of stock, why anyone would need twenty bottles of hand sanitizer is something I couldn’t explain, but people were starting to panic, so they took the cautionary measures they believed were suitable. The message “wash your hands'' became plastered all over social media. It became almost impossible to find a news story not about the Coronavirus, or so it felt that way. A day or two before quarantine started in Wayland, there was news that the surrounding towns were cancelling school for two weeks, and soon enough, Wayland cancelled school for two weeks.
I wasn’t allowed to be in close proximity with my friends, we were all supposed to be six feet apart. I wasn’t allowed to go in stores, get takeout, or even walk with my friends because my parents were worried that we would be too close together. I was stripped from my incredibly, busy week, to being forced to do nothing. I miss hanging out with my friends so much. I miss laughing so hard while we were together that we were left breathless. I miss hugging them, and feeling loved by their friendship. I miss the sleepovers we had together, and how we would stay up late at night gossiping. I miss driving around and going to random stores together to buy the most random things.

I wish I could say so much more about my situation, but I can’t. I miss my old life so much, and I wish I hadn't taken it for granted. Hopefully this will give you some perspective on the Coronavirus, and what life was like.