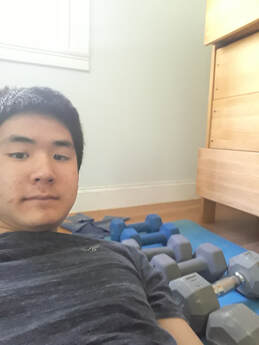 To say that this time has been life-changing would be overly-dramatic, but the monotonous, daily routine has afforded me the time for much forethought. In competitive sports, there is a common practice called visualization, in which an athlete mentally prepares themselves for the arduous game, race, fight, etc., that approaches. A quiet place and a resting position can allow the sensory imagery that reflects one's aspirations to surface in their thoughts. This ultimately grants the individual the proper focus and mindset that will be required to fulfill their task. While this exercise works well in the face of competition, it is not restricted to these matters, and it is easily applied to the sport of life.

From a junior’s standpoint, the quarantine was instated at a very compelling time: Junior spring. This is known to be one of the busiest seasons of the high school experience with tests and extracurriculars reaching their peaks, yet I find myself at home with comparatively very little required from school. While luxuries like being able to sleep in are great, there is a sensation of guilt because I didn’t have to endure what all previous juniors have. When the quarantine was first set in place in early/mid-March, I had so many significant events planned for the upcoming months leading into the end of the school year. Without these experiences, which would have been a mixture of hardships and celebrations, I am left feeling discontent and unsatisfied with the past year.

As my remaining time at Wayland High continues to dwindle, I try to look past this quarantine and anticipate my final year in Wayland Public Schools. Under lockdown, I have had the time to refocus and remember the long-term goals that I may have lost sight of in the haze of the school year. Although an incomplete finale to my junior year is bitterly disappointing, rather than weeping over the lost time, I have forced myself to draw plans with newfound motivation, awaiting my return to normal life.

One thing that has irritated me is the overwhelming criticism that NFL quarterback, Drew Brees, has received over an interview with Yahoo’s, Daniel Roberts. In the interview, Roberts asks Brees for his thoughts on players, when the NFL resumes, kneeling during the anthem in light of the civil unrest, an action that former NFL player, Colin Kaepernick, pioneered in the 2016 season. Brees firmly answered that he would “never agree with anyone disrespecting the flag of the United States of America or our country.” This is because when the anthem is played, he is reminded of not just “those in the military,” but his “two grandfathers, who fought for this country during World War II.” Brees proceeds to praise “the civil rights movements of the ‘60s, and all that has been endured by so many people up until this point.” I watched this exchange many times to make sure that I could better understand his viewpoint. When I listened to Brees and read the transcript, I passionately agreed with what he said. As a second-generation Chinese-American who has visited China many times, I proudly call America my home, and, when the Star Spangled Banner plays, I think about the sacrifices that have been made by, not just my family and friends, but millions of regular citizens that have privileged me the full freedoms of life.

Before the anthem is played, everyone is requested to stand. When Kaepernick knelt on the national stage, people were appalled. Of course, kneeling is a realization of our First Amendment rights (the very freedoms that we fight for), but it was not met well initially.However, Kaepernick spoke and his motives were understood. He was neither trying to disrespect the flag nor the country, instead, he was standing up for the oppressed and the injustices happening within a country that battles them on a global scale. In fact, Kaepernick originally sat down for the anthem; however, he reached out to a veteran, Nate Boyer, who believed the most respectful way was to kneel. Kaepernick surpassed his time and brought national attention to the murderous disrespect that blacks regularly face and the truth that not all people in our country are afforded the full freedoms by society. It is clear that Kaepernick was correct- the racist, cold-blooded murderers still run rampant in a country that supposedly fights for the rights of life and the pursuit of happiness. Kaepernick’s protest years ago was a topic that Brees’s African-American teammate, Malcolm Jenkins, touched on in a response to his comments. In an emotional video on social
media that amassed tremendous support, Jenkins also alluded to his grandfathers, who fought for the country that “didn’t come back to a hero’s welcome,” but rather “to racism, to complete violence.”

Similar to Brees’s comments, I watched Jenkins’s video several times. Jenkins is a well-spoken activist who felt hurt that his “brother” still did not understand what kneeling during the anthem represented. He was extremely upset that Brees seemed to believe that “everybody else should have the same ideals and thoughts that [Brees does] and that “the first thing that [he did was] criticize one’s peaceful protest.” It is with these statements that I believe Jenkins misunderstood Brees. Brees was voicing to the interviewer his personal take on the flag, not denouncing social justice or forcing any ideals upon anyone. His family holds a military background, and he perceives the anthem as a patriotic symbol for the service members who have fought for America. He would “never agree” with kneeling because he thinks it is disrespectful to those people. I trust that Brees understands Kaepernick’s intentions were not to disrespect the flag or our history, but simply disagreed with the method in which he urged the American people to wake up.

When I first heard Brees’s comments, I felt proud to be American because of his eloquent patriotic words. I have not followed the NFL closely for many years now, and I had no internal biases toward Brees, but I truly thought his words carried inspirational sentiment. However, I saw the public criticize and rip Brees as ignorant, spoiled, uneducated, a part of the problem, and refusing to listen, and I was angered that a man who simply showed attachment to his country got attacked. A part that is left out in the headlines is that Brees acknowledges the fundamental flaws within this country. Amongst his comments, he inserts, “Is everything right with our country right now? No.” Brees also concludes with a strong message that “by standing there and showing respect to the flag with your hand over your heart, it shows unity. It shows that we are all in this together, [that] we can all do better, and that we are all part of the solution.” The names and phrases that the public is using for him seem to directly contrast Brees’s concluding words for that comment. His talk about standing with everyone during the anthem as a symbol of unity and strength in these hard times shows his good intentions.

There is a discussion to be had on the meaning of the American flag- it isn’t simply defined as the virtues of valor, purity, and justice that the colors represent. Every American has different backgrounds and lives that can easily change how one interprets the flag, but to receive such negative feedback on a quite patriotic and unifying position is disappointing. Better wording from Brees may have alleviated the reactions in these emotional and difficult times, but I see that he is not trying to belittle the plight of black citizens, and I ultimately support his comments. Our humble opinions define us as individuals- to see an honest voice spurned with such aggression is upsetting and does not set a healthy precedent. I have tremendous respect for these three athletes because, as a competitive athlete, I recognize and admire not only the painstaking work that it took to arrive at their positions but also how well-spoken they are. Although I disagree with the practice of kneeling during the anthem, I highly respect Kaepernick’s objective and creative way of peaceful protest. I deeply sympathize with Jenkins’s frustration and pain when Kaepernick sent the nation clear signals to help our black brothers and sisters all those years ago. I uphold the goodness in all that Jenkins, Kaepernick, and Brees did or said.

I stand with Brees because I believe that during the anthem, we, as Americans, can offer to sideline our differences and stand together in a showing of solidarity and strength. I take it as a way that I can simply quiet myself and honor the service members of our past and present. That is how I perceive the flag.