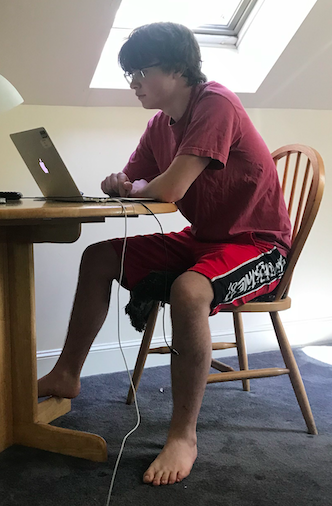 If someone would have told me my future 6 months ago, I would have laughed in their face and not believed a single word. It’s interesting to think about how much my situation has changed. It has been hard to let go of sports and activities and jobs and life. Everyone is a prisoner in their own home. Honestly, quarantine life sounds so good when you first think of it. I know I joked about missing school and not having to worry about any of my responsibilities all throughout my schooling. But when it comes down to it, online school and quarantine is much worse than going to school. Classes are held on an application called Zoom (which I’m sure is ancient and obsolete by the time you’re reading this, but maybe search it on the Internet, if that still exists). I wonder how much you know about Coronavirus 50 years after. So many people worked day and night to help solve the crisis in our country. My mom worked on the front lines as a contact tracer (someone who tracks the virus and makes people self-isolate if they’ve been in contact with a person who has coronavirus) and doctors and nurses risk their lives each and every day to help others. At the beginning of this virus, I remember talking about this mysterious “outbreak in Wuhan” and not worrying a single bit about what that means for me. I was about to start competitions in robotics after building a robot every day for 10 straight weeks. I was about to start my spring season of sailing, where I was hopeful to do very well in the league. We were trudging along in school when suddenly we heard that other schools were closing for a “deep cleaning” of the school when coronavirus cases started popping up in the state. My friends and I were wishing on every star that we would close for a day so that we wouldn’t have to have school. A few days later, the school closed down for a two week period, and that eventually got extended to the entire year. It seems great, but I can’t go anywhere without a mask, and everywhere is closed besides essential businesses like supermarkets. I can’t see friends or go to other people’s houses and I can’t come within 6 feet of anyone who’s not part of my immediate family. What seemed like a paradise to me a couple months ago turned out to be quite the opposite.

To imagine a world where the authorities take the lives of innocents seems outlandish and ancient. We, in the 21st century, believe that we have improved life for all of us and have moved past having to deal with systematic oppression. After all, America is the "land of the free". However, if we believe that inequality is not a problem, then we perpetuate that exact problem. For the past couple weeks, the country has exploded with mention of George Floyd and how a police officer took his life while Floyd begged to be able to breathe. Even though the death of George Floyd is terrible and is shocking and should never happen, it is not the first time that this is happening. Systematic racism in our country has existed all the way since the first slave ships arrived on our shores. When the general public heard what happened to Floyd, there was an uprising of support and anger that evolved into public demonstrations of solidarity. Some people took those demonstrations further to include looting and rioting. Through all the protests, the brutality of the police was ever present. This has also been heavily involved with the Black Lives Matter movement. To me, it seems like there's a cycle where the Black Lives Matter movement comes into the public eye when something significant happens that is recorded and goes viral. After that, it fades out of the public view even though their ideals and things they're working for are still valid. Each cycle has public outrage but there isn't much effect on the legislation that could help. This time, the reaction seems much larger. People are more angry and more wanting to show solidarity than ever before. It's important to consider the coronavirus situation that might be having an effect on this too. People have been stuck in their homes and want to get out and this may be the cause of some of the radicalism and the looting. If we look past the horrible events of the past two weeks, police brutality of black people seems to have exploded in the last twenty years. It get captured on video every once in a while and we are appalled because it "never used to happen". But, this view is false - police brutality has been around since America was beginning. Nowadays, we just see it more because it gets caught on video.

If we think back on history, we can still see this turmoil pop up every generation if we look closely. Back in the Vietnam war, there were riots and protests that were anti-war because people did not want their beloved neighbors fighting for something that they did not believe in. In that same generation, there was the Black Power movement and the Civil Rights Movement that formed the same riots and protests. Even before that, there was the public controversy about whether or not to go into either of the two world wars, people who were pro-war and anti-war showed their views by protests and public solidarity. To go even further back, race relations were strained again after the civil war when white Americans were not happy or willing to see blacks as their equals. To look back on the events of the past two weeks when considering the history of our nation, it seems evident that the voice of America is shared through protest and solidarity. People in America show what they want by using their right to assembly, and this has been a tradition since as long as our country has been around. I hope that this time what happened to George Floyd, Ahmaud Arbery, and Breonna Taylor will stay in the public mind and not recede. I hope that this time policies can be changed to ensure the equality of all people not just in terms of the law, but in the minds of every American.