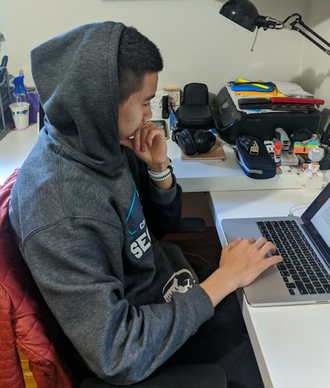 I want to start by saying that all the science fiction movies that predicted what will happen in the future I have seen were completely wrong. In these fictional worlds, almost none has a global virus outbreak and zero movies have something even close to COVID-19 which has changed our lives forever.

Like most of my classmates, I have had the time to do things I would not normally do in a school day before the “stay-at-home” period. During the first two weeks of quarantine, I barely did anything except reading and drawing. Not doing all kinds of things in one day made days go by slower and faster at the same time. When I was focussed on the tasks I was doing, time seemed to go by very fast and when I was just sitting in my house and doing nothing, everyday seemed to be as long as a week.

In the weeks after getting used to doing nothing, I got back to running regularly. At first, running alone did not feel as bad as I thought it would be. However, after many runs by myself, the feeling of needing a teammate to run with became more intense. Although I was able to run with my teammates, I usually saw other people walking their dogs or running on the aqueducts where I do most of my runs. Some of them I have seen before, but most of them were strangers to me. To avoid people to protect myself and my family from the virus, I began waking up earlier. It was hard at first, but I got used to it very quickly. By getting up early, I have seen one of the best sunrises I have ever seen in my life (maybe I thought the sunrise was nice only because I had nothing else to do) and I was more productive since there was no distraction.

With all these complications brought by the virus, I have learned to adjust myself and appreciate what I have. So I hope whenever you have to go through difficult times in your life, you can find the best way to deal with it for yourself.