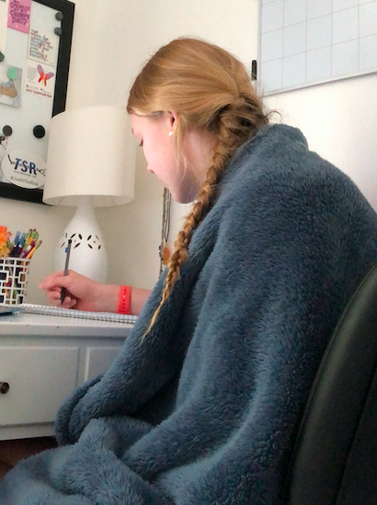 To the curious mind reading about history,

These past few months have been some of the most frustrating, upsetting, concerning, and strange times in my life. It is hard to describe the feeling of unease that seeps through society every single day. Before the pandemic, my life was structured and I was focused on fulfilling my dream of swimming for a division 1 college...now my future is unsure and chaotic. For 10 months I had been getting up every morning at 7 AM, going to school for seven hours, going straight to a three-hour practice, and then going home to do homework for the remainder of the night and then doing it all again the next day. This routine has become practically non-existent since in-person classes and practices ended in March. My days have all become one in a surreal way and it is not something that can be understood until it is experienced first hand. I miss being able to practice and compete, but above all else, I miss being able to hug and spend time with my loved ones. In the span of three months, I have missed 40+ family and friends birthdays, three once in a lifetime trips have been canceled, I have missed seeing my best friends graduate, 2 swim seasons have been canceled, prom was canceled, and we have spent 77 days away from school. For me currently, my biggest worry about the future is how I will be able to not only apply to college but also let alone be an athlete at the next level. How will I apply to schools without having taken the SAT? How am I supposed to know where to go if I’ve never been? How can I be sure that I want to be a part of a team I have never met? My future that I have been working for since I was 5 has been suddenly ripped away from me with no answers or end in sight. From a societal standpoint, I can’t help but think about how this will change the world forever. This virus has taken so much from so many and there is no end in sight. Life will never be “normal” again. When will there be a vaccine? How many more people will die? Everything is so uncertain and no one, not even the experts, knows what to do. Three months ago I could never have imagined what life would have become, I was just settling into a new club swim team, figuring out my dress for prom, thinking about what to pack for my trip to the NSPA journalism conference in Nashville, and getting excited for the summer swim league at Wayland Swim and Tennis club and within days all of our plans were put on hold. No one knew how bad this would be and despite being one of the biggest advocators to close the school I never thought it would be the end of my year. What was supposed to be a two-week pause on normal life has turned into a complete change in society that has no end in the foreseeable future. While I understand how dangerous this virus and will continue to follow instructions from experts, it hurts to know how many memories teenagers have missed out on and will continue to lose the longer we go without a vaccine. I hope you have never and will never experience anything like this and I hope that the world comes out better in the end, but for now, it is a mess. The world is in shambles in so many ways and I can only hope that the future is more prosperous and fulfilling. Live your life to the fullest, you never know when the world will change overnight.

When I am asked to think about how I’m feeling about our country it is hard to ignore how much of a change in emotion I have felt in the past few months. From the beginning of the Coronavirus pandemic, I have been feeling emotions in heightened and copious amounts which have made a significant difference in my overall feelings about our country. Before the virus became a problem for America I was confident in our nation’s ability to protect and serve our country in whatever capacity that may be. In light of the initial and continued response to the virus, I am shocked and beyond disappointed in the ways we were unprepared. We knew it was coming yet we waited until it was here to do anything, and not only that we have known for years that a pandemic was coming sooner rather than later. Not only am I disappointed that the country that claims to be the best country in the world because of its response to a pandemic, but I am also overcome with emotion thinking about the ways in which we are confronting racism. Not only are we fighting a war on the pandemic but now we are also starting a civil war- the racists vs everyone else. It’s hard to tell what exactly caused this to be the time the Black Lives Matter movement exploded, maybe it was the murders of George Floyd, Breonna Taylor, or Ahmaud Arbery, or maybe it was the heightened emotions, or maybe it was the fact that we have never really been forced to pay attention because of life’s distractions such as work and school. Whatever it may be it has sparked a movement stronger than I have ever seen in my lifetime. The sheer numbers of people in support of the movement far outweigh those who don't, flooding social media with awareness and causes to support. Our eyes have been opened as a nation and especially the youth have been inspired for change. I can’t help but think about how long people in our country have been fighting for equality and justice for all. I can't understand why it is a controversial or political conversation- it is basic human rights. The protests do anything seemingly controversial in our country have been met with force and those who choose to fight for their rights or beliefs in a violent way have suffered tremendously at the hands of our law enforcement. Abuse of power is an ever-present issuing our country that demands our immediate attention to hold people accountable for their actions. I feel like we have failed as a country to keep our citizens safe, whether it be from a deadly virus or racially motivated brutality. These problems aren't new, we as a country have seen this many times before, yet we never learn our lesson. We need to do better, not only in this moment but for all of eternity because everyone deserves to live a long and prosperous life free from prejudice and fear of not being able to protect themselves.