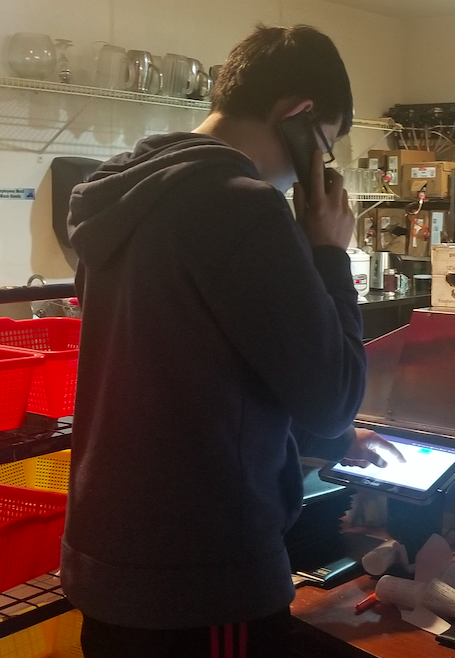 Dear fellow student reading this in the future,

My name is Mingle Li, and I’m a seventeen year old Chinese student at Wayland  High School. Currently, it’s May 27th at 3:34PM, and I’m in the middle of a pandemic. The entire world is actually in the middle of a pandemic, due to the virus known as COVID-19. This microscopic devil has upturned everyone’s lives in almost every aspect. My situation is unlike most of my peers, because my family owns a restaurant. It’s called Sapporo, and it’s a Korean barbeque and sushi restaurant located in Westborough. Because of the coronavirus, we had to shut down all dining-in. Eating in a restaurant isn’t just about the food, it’s also about the experience, but all of that is gone. It just isn’t the same, and it certainly isn’t the same for restaurant owners either. Not only has the restaurant been affected in numerous ways such as revenue, and health procedures, but my own personal life has been affected. Starting from somewhere around April, Governor Baker (governor of Massachusetts at this time) issued an order where no student could go back to school in person, and instead, education was replaced with online learning. This might sound great, but almost every student takes for granted the experience of school – you get to see your friends daily, play sports after school, or maybe go for a Dunkin run. All of that is now gone, and seeing your peers over Zoom and Google Meet isn’t the same. Attached, you can see photos about the changes in Westborough, from pictures of the restaurant to the CVS and Cumberland Farms nearby.

To be fairly honest, I’m conflicted about how I’m feeling about this country. The United States is a powerhouse country in itself, and many claim that it’s the best, but I’ve recently been questioning if it is actually the best. We hold pride in our freedoms and supposed equality, but things like the recent George Floyd murder just prove over and over again that not only are people not equal, but people are also not free to do whatever they want in fear of racial profiling and the consequences that come with that. Current racism aside, I’m quite appalled at just how divisive everything is right now, and part of that blame is on the President, whose strategy, it seems, is to divide and conquer the people. When citizens of the United States were agitated in the past, presidents often advocated loving, trusting, and supporting one another during difficult times. Nowadays, the tensions between white and black, Democrat and Republican, just keep rising and it’s now to a ridiculous point where everyone is blaming each other and calling each other horrific names. Right-wing supporters often throw around the words “f-ing libtard” and “f-ing commies” as if it were the era of WW2 and Nazis in Germany were saying “f-ing Jews”. But don’t get me wrong, it happens both ways, to both sides. As memes online circulate about how other countries are watching the United States fall into a “s-hole”, I agree with them. What’s wrong in this country that makes things like this escalate to a point of no return? Are we really the best country? Other countries maybe use more peaceful options, but is violence really necessary in the name of freedom?