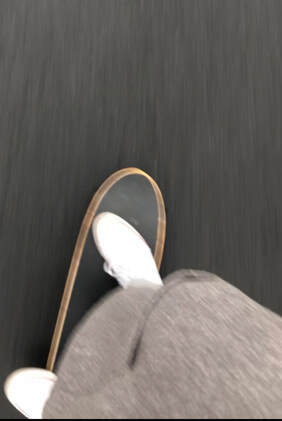 Having my life be in constant movement makes me lose sight of extremely basic understandings. If there’s one thing that 2020’s Covid-19 quarantine has incited for me, it’s forced personal reflection. Of course, no one is telling me to think about myself, my emotions, nor my life, but being in the same house for months on end bores me very quickly. One can only find so many things to do, so many hobbies to pick up, before finally running on empty. In my case, introspective thought is the one way to truly spend my time productively, whether or not I physically get anything done. And such, I feel completely cut off from society. I know that that statement sounds melodramatic, considering the vast amount of information that I can easily acquire through the internet, but it truly feels that way to me. I’m not someone that needs to keep tabs on everything that’s happening in the world, but there has been so much happening that it feels like complete sensory overload. My reaction to this, whether or not I am in forced quarantine, is to turn away from said overload. I know essentially nothing about the virus. I believe in its existence, and I believe that going to populated public places will yield more of a risk than a reward. I have been told this by my parents and by my well-informed friends. I am fully aware that it is my responsibility to be up to date on the status of something as important as an epidemic, but based on my own logic, I’d rather be ignorant of it. In the future, I am sure that the amount and quality of technology will skyrocket. People won’t really take time to think about thinking. I feel that I most likely would never have taken the time to sit down and think with no distractions if not for the drastic situation we are in. I hope that if anyone that is my age in 2070 were to read this, that they would try and clear their minds of distractions.

The most blatant connection that I found between “Vietnam, A Nation in Turmoil” and the events of the last week is the topic of protesting. More specifically, what the correct form of protest is—if there even is a ‘correct’ way. I can also make the connection between a small portion of the beginning of the reading focusing on Woodstock and present times.

A minuscule amount of the reading talks about the people participating in the Woodstock festival. The reading states that “although police estimated that almost 90 percent of the concert goers were smoking marijuana, there were no reported rapes, fights, or robberies and very few arrests”. Firstly, this quote exemplifies the unnecessity of the criminalization of marijuana in present times. The majority of people that smoke marijuana aren’t suddenly more prone to commit crime, and this quote that cites an event from decades ago proves this. Secondly, I would like to emphasize the part of the quote that states that there were “very few arrests”. Although not stated in the quote, I would assume that the majority of people in the concert were white. I would also assume that there’s a correlation between the demographic of concert-goers and the amount of arrests. In the U.S. today, marijuana is slowly getting legalized, but as of the last few decades, there’s been a crackdown on criminalizing it. I don’t think that it’s that much of a stretch to say that if there were more black people at Woodstock, that the amount of arrests would have skyrocketed.

The topic of protesting is interesting to me, considering the amount of people that are pointing their attention in the last week towards the different kinds of protestors (and whether or not violent protestors are valid). The reading also focused on noting how students at Kent State in 1970 were either being nonviolent or violent towards guards, with the violent students being directly correlated to the shooting that occurred thereafter. What’s interesting to me is the fact that outrage was only sparked nationwide against the Vietnam War after the Kent State shooting. “More than 250 college campuses” were closed by the protesting of students. I can draw parallels between this and the events of the last week. The event of George Floyd’s murder at the hands of a police officer sparked outrage in millions of Americans that were sick of the system that perpetuated anti-blackness. More and more changes are being introduced to the conversation through the protests, considering that many protests have been violent. I believe that if protests were only nonviolent, there wouldn’t be as much opportunity for reform and/or abolition of police. In the same way that a violent event such as Kent State created more controversy about the Vietnam War, violent events all over the U.S. as of later are creating the first steps towards true change.