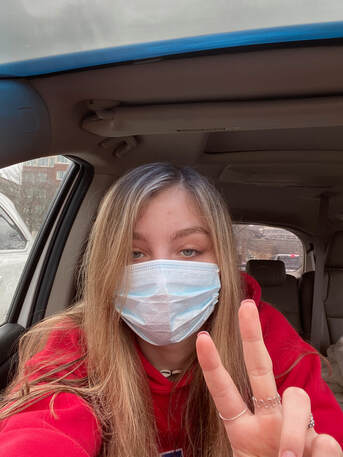 Throughout the past couple of months I have found that I have grown as a person. At first, I remember texting my friends and discussing how two weeks would feel like an eternity; however, those two weeks flew by, in part because I became very sick within a couple of days of quarantine. This was a challenge on its own. Mostly because all minute clinics were closed and getting a doctors appointment was nearly impossible. Before I was even allowed near a hospital I had to take a test for COVID-19. This was not only to protect the doctors, but to inform my parents (who work in the medical field) if they had to be tested. I vaguely remember hearing a news reporter mentioning the ridiculous waiting time that came with the Corona tests. Let me tell you, I experienced this first hand when I was quarantined in my room for 5 days, soberly awaiting my results. Luckily, I tested negative, and I remember when I finally arrived at the hospital for my doctor’s appointment, the halls were silent and only four doctors were working. Throughout my appointment, my doctor made a couple of jokes about how ridiculously strict every procedure was supposed to be performed, but how it was challenging to actually do due to the lack of personal protective equipment in hospitals. Despite my doctor’s humor, she seemed on edge and my dad and her struck up a conversation about how the next couple of months were going to cause chaos in hospitals.

After the appointment, I slowly recovered from my sickness, and I found that creating a routine helped me get some structure back in my life. I decided to take the extra time I had on my hands to start working on things that I had kept pushing off in the past. I got my boating license, redecorated my room, read a couple of books, and spent more time with my family. However, I found that although I felt productive this only helped mask the fact that I missed talking to my friends in-person, and the environment of an in-person academic class.

Additionally, I’ve started hearing more and more about quarantine being extended into 2021, which makes me sad because that will be my senior year of high school. Although states have started to ease some regulations, I believe that the situation with the virus will worsen again before it improves because of the warm weather and people’s tendencies to spend a lot of time outside with friends during the summer.

Although this whole pandemic has definitely put a halt to normal everyday activities, I think that I have learned to appreciate not only my friends, but also myself. I have learned to be comfortable with spending time on improving myself instead of constantly trying to distract myself with all the other things going on in my life. I know that whoever is reading this is probably thinking that not having to go to school for three months would be the best thing that could happen, but in all honesty, I think that at this point everyone is missing the everyday motions of school, so please, appreciate being around your peers and being able to laugh and have in-class discussions because trust me the phrase “you don’t know what you have until it’s gone” is resonating too much with me right now.

At this point in time, I am disappointed in our country. Not only with the way we are handling the situation at hand, but the fact that we have let police brutality continue for such a long time. It makes me very sad that despite Lincoln’s efforts during his presidency, we as a country, have not been able to achieve complete equality between all citizens of the United States. I believe that there are many examples in which it is clear that African Americans are held to a different standard than white people in our country. Two examples that stand out to me are obviously, the greater rate at which police brutality is seen between policemen and African Americans, and the second is the inequality in health care. Our country makes it so incredibly hard for someone that is African American to get on a path to success. Any small misstep is met with a wave of repercussions. I find it interesting that in the reading about the Vietnam War it is mentioned that “many of these students began questioning their parents' values, especially those connected with materialism, sexual mores and tradition; sex roles, corporate structure and power, and the kind of patriotism that supported the Vietnam War.” I think that this connects to today’s society in regards to dealing with the Black Lives Matter movement. Many teens are starting to realize that the opinions that their parents and grandparents have about the current situation do not reflect their beliefs and morals. I believe that what adds another layer of complexity to today’s situation is the idea that many people refuse to believe that they are racist. Don’t be silly, I can’t be racist, my sister-in-law is black! Many people don’t want to admit that they are racist because they will feel like they are lowering themselves to the level of the slaveholders during the civil war who abused and mistreated their slaves. This would feel demeaning and in all honesty many people are not as racist as these slave holders, but I think that in a time like this it is incredibly important to have hard conversations about racism with the people around you because by ignoring the problem, no change will be made. Everyone has different patterns of internalized racism, but it is up to us to recognize what these are and to work on reverting them in order to make a long lasting change in our country.