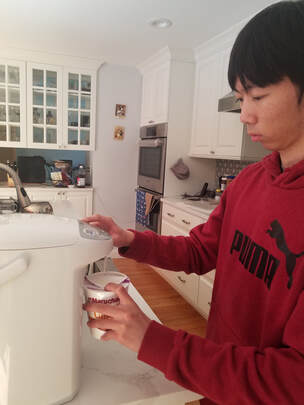 Ever since we were ordered into self-quarantine, I have had difficulty maintaining a proper sleep schedule. Nearly every day I would stay up late into the night and well into the morning. By the time I go to bed, I can hear the birds chirping. In the past month or so, the earliest I have slept is 3 am while the latest is 5 am. During the first few weeks of quarantine, I slept for 12 to 14 hours every day.
Besides sleeping, I have also started exercising and driving more. The amount of time I spend on the computer has increased drastically, both because of schoolwork and video games. I have been interacting with my friends mostly online, but it isn’t the same as seeing them in person. Sometimes I’d meet up with my friends to play Pokémon Go.
I miss seeing my friends and going to restaurants. At one point in the quarantine I had eaten cup noodles for lunch for up to 10 days in a row. While eating dinner with my family every day is nice, it’d also be very pleasant to go out and have some pasta at Giacomo’s.
It’s been really sad seeing how all the stores and businesses have to remain closed. I visited the Natick Mall a few times, and aside from the Cheesecake Factory’s parking lot, the entire mall seemed barren. Back in April was when things were really empty and inactive everywhere. Now that it is late May the weather has warmed up and many people have been out biking, walking, and such.
A lot of support has been sent to the seniors and their graduation. I’ve been seeing some seniors gathering around in Wayland, presumably just to hang out. During the weekends, a parade of seniors would drive their cars down my street, honking their horns and yelling at one another from their vehicles.
It’s been a win-lose situation on the road. With fewer cars on the road, it’s been less hectic and more relaxing to drive around. Despite that, the decreased traffic has encouraged many people to become quite reckless while driving so it is still aggravating at times. People would run red lights or go beyond 10 miles over the speed limit and such. I recall being on the highway and seeing people zooming by at well over 80 miles per hour.
I visited Boston a few weeks ago and it seemed that the situation was being taken more seriously there than in the suburbs. While only some people were wearing masks here, everyone had a mask and was social distancing on the Boston streets. The overall inactivity in the city just seemed generally odd to me. It was too quiet and peaceful for a city like Boston.
There are still many things I am bitter about. The pandemic has led to many events I had planned for the spring to be cancelled such as spring sports and the SATs. Students that had their spring SATs cancelled have recently received an opportunity to sign up for fall SATs in advance of everyone else.
It has been a tragic loss for the seniors, but I am beginning to worry for my own grade. How much of our school year will be affected by the pandemic? Will the pandemic have a second wave and consequently force us to return to remote learning in the fall? These are just some questions I have been pondering.
I hope that things get better as we enter the summer. As a junior, it has been difficult to have so many plans cancelled, but I believe that we will pull through. Whether we will be together physically or virtually, I hope that we can still make the most of our senior year.

I’d be lying if I said that I am completely on board with the resurgence of the Black Lives Matter movement. I have always despised racial inequality and injustice, but I feel that now is not the best time to gather and protest amidst a global pandemic that has swept our country off its feet. I don’t support all the protests taking place now because I do not want another wave of this virus, I do not want more people to suffer. My disapproval isn’t because I don’t agree with the protesters, but because I just don’t think now is a good time for various large gatherings.

There is a time and place for everything, and unfortunately, in a time when a virus has taken over our lives, racial justice should not be at the forefront of our concerns. I’ve always been quiet about my opinions because I am usually in the minority. Especially with a sensitive subject like race, I always fear that I will get backlash for my beliefs. And rightly so, as my opinions are often covered with criticisms and complaints about the general population. But this issue, this promotion of BLM has spiraled out of control. I’ve seen on social media so many people condemning the entire police force and going so far as to disconnect themselves from people who “don’t support the Black Lives Matter movement”. These people, who speak so highly of the importance of free speech, are not willing to listen to others. They are not willing to consider how others feel about the situation. To me, the attitudes of our activists and the government are what’s going to give this state of our country such a black-and-white appearance in the future. People will interpret this moment in history as equality vs. oppression, as the people vs. our government. There is no room for third parties.

I can see many parallels of our present with past events in America. So many conflicts have been reduced to a war between two sides such as the Civil War and the Vietnam War. The North and the South, anti-slavery against slavery. America and the Soviet Union, capitalism against communism. Any other groups that may have offered a different perspective were completely obliterated, they became obscure as time went on. My opinions, as well as others, will be blotted out from history. And it won’t even be because of our government, it will be because of our fellow citizens. Our society complains that our government censors us, but it seems that we do that to ourselves.

I argue that it is not a good time to go out and protest for racial equality; personally, I think that the threat of Covid-19 is more important.

Leadership has always been a critical factor for a country to operate. For the 1800s, when our country was divided and at war with one another, it was Lincoln who made the difficult decisions. During the economic depression in the 1930s, FDR came out and put the concerns of the public to rest. We have had so many leaders do their part to keep our country together in the past. Now, as leadership seems more absent than ever, the situation continues to worsen. The discussion of Trump and the way he leads our country is one I often shy away from. I do not hold any strong sentiments towards our current government, but what has become obvious to me in the past few weeks is the lack of empathy and compassion being addressed from our leader. I don’t know what it is like in the White House amidst the pandemic and these protests, but a statement I can make for sure is that Trump has not made an impact as important and crucial as past presidents like FDR have. Our country continues to spiral into chaos, and the necessary leadership we need to keep ourselves sane is not there. There is no comfort or reassurance. Instead, there are lies.

I’m going to end this entry because I don’t want to go on a rant about our society. But what I want to conclude is this: I fully support the Black Lives Matter movement, but now, amongst a pandemic, is not a good time for protests and gatherings. I fear the resurgence of this virus more than I applaud the resurgence of BLM. I’ve seen no support from our government, only lies. I see no harmony from our citizens, only ignorance.

*I recommend the movie Detroit (2017). It is a film I watched a few years ago and has been one of the few that provoked strong feelings of anger and bitterness from me.