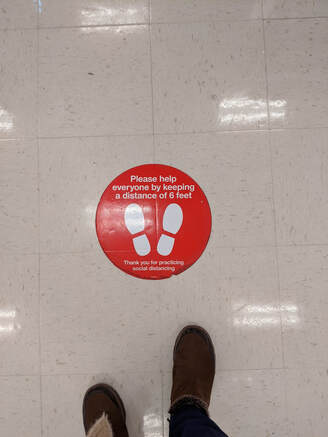 Dear Student X,
My name is Kristen B. I’m 16 going on 17 and I went to school in Wayland in the year 2020. To start, let me remind you that I write this knowing nothing about you or what you have been taught about the year 2020. I don’t know how your generation will remember it or how you’ll judge those of us that lived through it. I don’t know which name your generation has chosen for this period of isolation, fear, and uncertainty. I don’t even know if and when this pandemic will end. What I do know is that you are a history student at Wayland High School in the year 2070. You are probably sitting in the same room in the same seat that I’d be sitting in if it weren’t for the pandemic. You weren’t alive when the quarantine started, but you’ll probably have an essay or a test on it at some point. I doubt this letter will help with that, but I hope that by the end of this letter you will have a better idea of what happened this year and how it affected perfectly normal teenagers like me.
About three months ago, my primary concern was surviving the dreaded month of March. In addition to juggling homework, essays, and tests for six Honors classes and finding time to visit colleges, I had to prepare for a Taekwondo belt test, learn the music for two Spring concerts, study for the impending AP and SAT tests, and help organize teams for the Science Olympiad state meet. To say I was stressed out of my mind would be a massive understatement. I don’t know how much education has changed since 2020 -- you may or may not understand what I mean when I say I felt the weight of my future on my shoulders. That’s probably why I didn’t see it coming. I saw the name on a couple headlines -- that was the extent of it. I heard that Wuhan was quarantined. Then I heard that China was quarantined. I wasn’t bothered -- China was an ocean away, and by all accounts it was just like the flu. Then we heard that Italy was in lockdown. Even then, a potential pandemic couldn’t have been further from my mind. Some people joked about it in the hallways between classes. Most of us were too busy trying to survive high school to talk about it. When we heard that some American schools were closing down, we laughed. We thought they were overreacting -- it was just like the flu, after all. We never thought our own school would be the next to close down.
From one day to the next, everything changed. The Science Olympiad state meet was canceled. Concerts were canceled. Then we left school one Thursday and got an email telling us we weren’t coming back the next day. Our curriculum ground to a halt and we engaged in “enrichment” which didn’t count towards our grades. At first, I was relieved -- I really needed a break, and two weeks at home seemed like the perfect solution. Pretty quickly, two weeks became a month. Then a month became indefinite. We switched from “enrichment” to “distance learning”. Grades became pass/fail.
There are a lot of reasons why online learning is so hard. For one, staring at a digital reproduction of your teacher all day just isn’t as engaging as being there in person. It is so much harder to focus when everything you do is limited to the same eight by eleven screen. For another, there’s the home setting. I know some people who work well from home, and I’m sure quarantine has been a productive experience for them. I’m not like that. I’ve never been able to do anything productive at my house -- when I was at school, I would always take the bus to the library after school and stay there until I finished my homework. When the quarantine started, I tried to work on my bed. This was about as successful as you can imagine. I then transitioned to the kitchen table, which was too loud for me to focus. I have since commandeered my parent’s sitting room, which is my best option right now. It still takes me twice as long as normal to do most work. I can’t imagine how much worse it must be for kids who aren’t lucky enough to have their own workspace.
Outside of school, this quarantine and all that has happened since has had a lot of consequences for my family. In Egypt, my aunt has spent the last ten years trying to get a green card to work in the U.S., and this year she was finally approved. We were looking forward to seeing our cousins for the first time in years this summer. Now that America has closed its borders, there’s a chance my aunt won’t make it here before her visa expires. We are hoping the borders will open before the end of the summer and they will be able to come over, but it’s frustrating that after all this time, the pandemic is the only thing standing between my aunt and a green card. I have to keep reminding myself that there are probably a lot of people in the same situation.
Student X, I don’t know what you’re going to take away from my story. Maybe it was boring and you’ll forget about it in ten minutes, or maybe I somehow inspired you or helped you to see things from a different perspective. It doesn’t make much difference to me, but I hope you remember that what you learn in history really happened to real people like me.
Sincerely,
-Kristen B.

At this point in time, in the wake of George Floyd's murder and in the midst of a pandemic, I'm tired of America. I'm tired of hearing politicians debate the same issues over and over again expecting a different result. I'm tired of American greed and entitlement -- of constantly listening to people who believe their rights are absolute and supreme to all others. I'm tired of being politically correct -- of constantly trying to sculpt my language in a way that doesn't offend people rather than just speaking honestly. I'm tired of the far left and the far right. I'm tired of living in a country where people still die because of the color of their skin. But most of all, I'm frustrated. I'm frustrated because I know that one day, my generation will be expected to clean up a mess we had no part in making because that's the world we inherited from our parents. Even people like me who have no history here, whose families come from somewhere else, will have to fix this country's broken legacy.

I know that this is nothing new -- I know that America's history is full of irony. For over 200 years, slavery was booming in the land of the liberty. In World War II, the home of the free wrongfully imprisoned thousands and thousands of Japanese-Americans, taking them from their homes. In a country where all men are created equal, segregation prevented people of color from gaining any kind of success or freedom. But I don't expect any nation's history to reflect our modern ideals -- it isn't fair to judge the people of a given time based on a later standard they couldn't have imagined. No nation is free from the guilt of oppression or war. But the year is 2020 -- we have the internet and technologies that make it possible for people to work more rewarding, less dangerous jobs. Why are we STILL arguing about whether or not an African American life is worth as much as a white life? Why did George Floyd have to die?

At the same time, I'm aware that it's not all terrible (I have to be, or else I'd lose my mind). The economy is finally improving a little. People in all 50 states and 18 different countries have participated in protests so far -- this is the most visible BLM protests have ever been. Even police officers have taken part in the protests. People are even finding ways to support the cause without leaving their houses, whether from youtubers holding fundraisers or online petitions. I have never seen more support for black artists and creators, and I have never seen so many youtube videos, articles, and Zoom discussions whose purpose is to just talk about race in an open and safe environment. It is important to remember that no matter how bad things are, people will always find ways to unite and bond together across racial, social, and political boundaries.