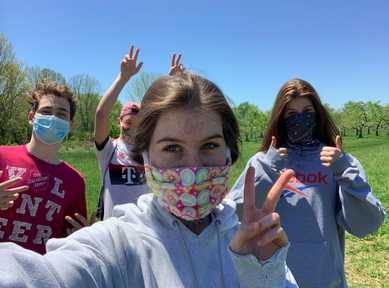 I’m living through history. The CoronaVirus Pandemic has absolutely flipped the entire world upside down. None of us had any idea what was to come when we were released from school on March 13th, 2020. The rest of the country and I were under the impression that the infection would blow over quickly, and that life would be back to normal in no time. It has been seventy-seven days since I last felt like the world was not breaking down.

Masks are required by law in almost every public place. You can’t enter your local Stop and Shop without having a face covering to protect yourself and others from germs. Gloves are recommended but not required. Life feels like a recovering post-apocalyptic society. There are rules now for who you can see, when you can see them, and who you can touch. You’re supposed to be “social distancing” a much as possible which is basically water down social isolation. Everyone is doing their best to follow the new CDC guidelines, but our country hasn’t been through this is a long time, and everything is complicated. Communities are starting to attack each other because of their different opinions on health and safety. Adults are acting like children: cyber bullying their neighbors because they are scared and feel they are better informed than others.

The most complicated part is if you actually get sick. When you test positive for Covid, you are expected to self quarantine for fourteen days until you are non symptomatic. Not only that, but if you become sick enough to go to a hospital, overworked and under-protected healthcare workers are in charge of your care. America was not prepared for this Pandemic, and I hope the future learns from these past mistakes. The massive outbreak could have been minimized if the US had understood how critical it was to prepare for a national health hazard. I wish the future the best.

When students disagreed with the government's response to conflict in Vietnam, they protested. Americans stood up for what they believed in because when there was injustice they used their rights to their advantage. This Vietnam situation reminds me of where our nation stands today, fighting against racism still deeply rooted in society.

When students protested, some handled the situation with violence and some handled it with love. Few students handed flowers to the guards, while others threw rocks at the crowd, and still the police responded with brutality. This issue still exists today, where protests about police brutality are fought with police brutality. Even Though they were just kids, and somewhere handing out flowers, the police still shot to kill. In the BLM protests, there is a balance between peaceful protesting and rioting, yet police are responding with the brutality they always have. For peaceful protesters, children have been pepper sprayed, an old man was tackled to the ground, and another child was shot in the head with a rubber bullet. These were children and the police still used extreme force against them, just like they did to the Kent State College students. Obviously we have not come as far as we hope we have.

Related to the response of protesters responding by damaging property, I wonder if the police are only focusing on that when harming crowds. When the Vietnam era students were shot, I believe it was because they were throwing bricks rather than handing out flowers. I wonder if cops now are responding with violence because they only focus on the non-peaceful protesters? It's interesting to consider. Do police have so much power that when they feel threatened or disrespected they just kill? The saying goes that power can get to your head and make you numb to the situation that surrounds you.

It is clear that police brutality still runs this country, while the fear of the citizens protests. Hopefully we learn from our past to now, and eventually the future to improve as a country.